Day 8: I am going to combine two days.  I know….slacker.  I have taken on some ordering and shipping work from a photography company that takes pictures at the big bicycle races all over Colorado.  So yesterday was spent in front of a computer screen.  Lame.  It won’t be as lame when I get the […]

Day 8:
I am going to combine two days.  I know….slacker.  I have taken on some ordering and shipping work from a photography company that takes pictures at the big bicycle races all over Colorado.  So yesterday was spent in front of a computer screen.  Lame.  It won’t be as lame when I get the paycheck, but for now it was lame.  Now I am trying to play catch up!
Yesterday (in the midst of data entry) I ran out to do a photo shoot.  Ding Ding.  A chance to get my Pinterest Challenge done for the day.
I was taking pictures for a couple that I have known since High School.  I was in youth group with their daughter.  They are an amazing family and she wanted some pictures to document their 40thanniversary.  Awesome, right?
So I went onto my “Couples” board and bingo…I found a shot that I wanted to get.  I loved this shot of this couple dancing from Brian Powers Photography.
I thought it would make for a great shot that is very natural looking and produces easy smiles.  It is easy to give directions for also.  Many people, especially men tend to be uncomfortable in front of the camera and you really have to show them what you want.  It is too hard to describe….better to just actually show them how you want them to pose.
So when we were about halfway through our session I had them to go into the field and then told them to start dancing.  They laughed!  Apparently she doesn’t ever dance (even with his prodding at weddings and such).  I forced them to anyway and I loved how it turned out.  Don’t they look carefree and happy!  I know it is far away, but their kids don’t know they did this shoot, so I was trying to keep it from being too close up.  But stayed tuned….there are some amazing shots of these two to come! I am kicking myself that I didn’t get a little closer to get their facial expressions, but I didn’t want to make her even more self conscious (I did get some that were a little closer than this one, but not as close as the one on Pinterest)!
I will defineatly be trying this again in the future.  It just loosens them up and gets them smiling and laughing.
Day 9:
Today it was finally time to do something with the boys.  In the past, I have shyed away from doing crafting projects with the boys.  For those of you with all girls…I am about to rock your world.  My boys VERY RARELY sit still long enough to do crafty things.   I have TONS of coloring books.  No one ever colors in them.  When I pick up JJ from Sunday school I see all of these beautifully colored sheets…..from the girls.  My son’s has one color (usually green because that is his favorite color) and maybe 2-3 scribbles.  Boys just don’t sit still long enough to do those kinds of things.  This used to be distrubing to me.  I used to spend HOURS coloring.  I kept buying coloring books to entice them to color, but it NEVER happens.
Therefore, I am always skeptical of doing crafty projects with them.  I think the tide is turning.  They sat for a good 20 minutes at the table today working on our challenge.  It gave me warm fuzzies.  Especially because the reason I picked this particular project was that it would be quick and easy.  I thought it would be 5 minutes or less.  WRONG.  They loved it and were so much more creative than I gave them credit for!
Here is what we did today.: I thought that with Tanner still working on reading, this would be a good one.  I also thought it might entice them to do some more reading this summer.
Here is what we started with:

Then you get this: Don’t you think he looks like Christopher Lloyd as the bad guy in Who Framed Roger Rabbit? 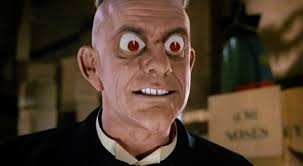 Here are our finished products.  Don’t you think they turned out way more fun than the one on Pinterest? Don’t you think that Makai looks like the bad guy from Rocky and Bullwinkle? This was so much fun!  Thank you Pinterest for making a boring Tuesday afternoon tons of fun.  And making me realize that my kids might not sit for hours and color, but they can still be creative and have fun doing crafty things.
This was from my “Good Ideas” board.  And it delivered.  It was a good idea!